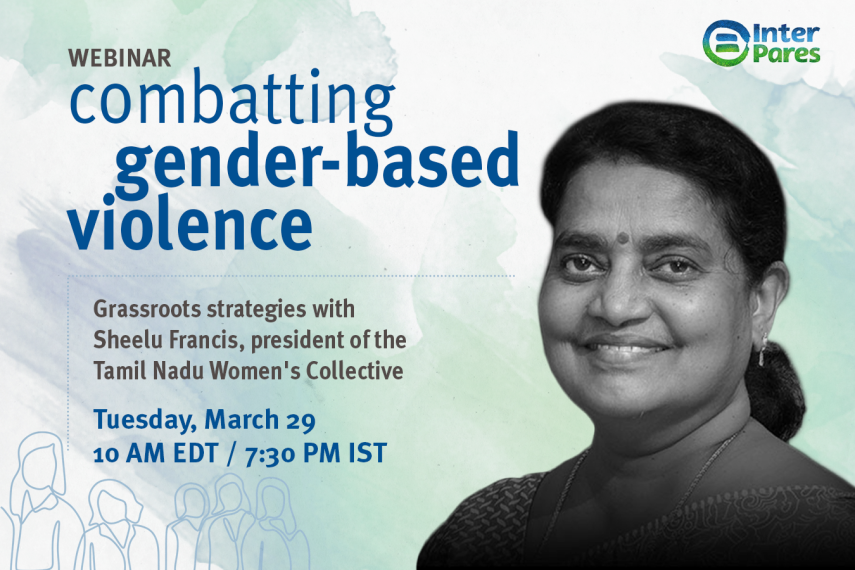 Sheelu Francis joined Inter Pares for a discussion on strategies for combatting gender-based violence. Sheelu is president of our Indian counterpart, the Tamil Nadu Women's Collective.

Sheelu shared her decades of experience working for women’s empowerment in India and the tactics she, and the tens of thousands of women in the Women’s Collective, have developed to counter violence against women.

Watch the conversation below

Sheelu is president of Tamil Nadu Women's Collective and is one of the founding members. The Women’s Collective is a network of rural grassroots level women’s groups working in about 20 districts in Tamil Nadu state in India and focuses on Dalit rights, local governance, rights of workers in the unorganised sector and rights of senior citizens.

It has empowered close to one hundred thousand rural and marginalised women – almost 90% of the members are single women, landless women and widows. With the collective’s support and guidance, the women farmer’s collectives have gained skills on agriculture, improved their leadership and decision-making and enhanced their economic and social status.

Sheelu is an international spokesperson and actively speaks before the world about international trade, debt, the impact of transnational corporations on local development, food security, and food sovereignty. She has been recognized internationally, winning the 2013 Food Sovereignty Prize from the US Food Sovereignty Alliance and in India she was nominated by NDTV, a leading Indian news channel, for the Women of Worth award. Sheelu holds a diploma in Gender Planning for Development from the University of London.