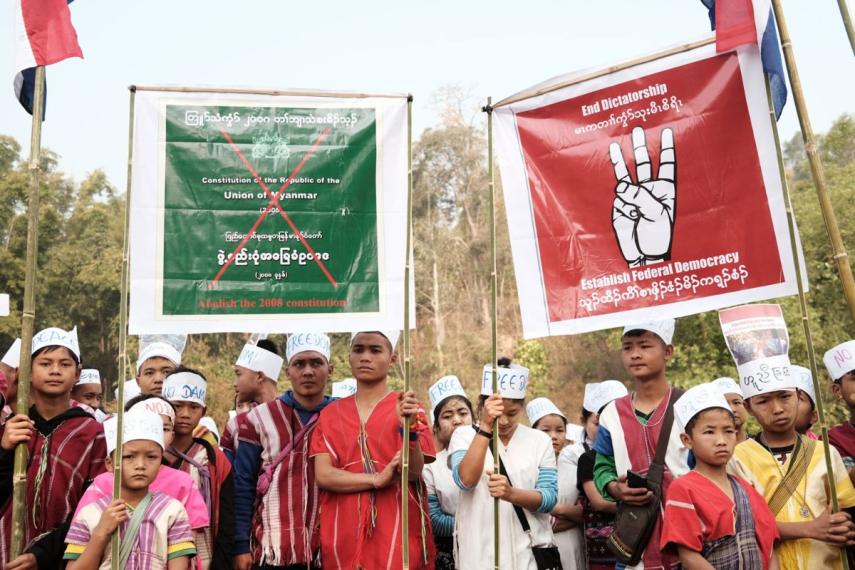 On February 1, 2021, the military in Burma attempted a coup d’état – partially taking control of the country and trampling Burma’s fragile democracy in the process.

What’s happened in Burma since the attempted coup?

For the past year and a half, people have been using protests, public education and boycotts to resist the military’s efforts to take over the country. Violent attacks against protestors have become common and military assaults in Indigenous communities have intensified. The death toll has skyrocketed and thousands have been wounded.

In spite of this, millions of activists from all corners of the country are united to resist a return to military rule and ensure the brutal and ongoing attempted coup is not successful.

Send a letter to your MP today

Indigenous voices at the heart of the resistance in Burma

The unity among activists we see today in opposition to the military did not always exist in Burma.

Indigenous communities in Burma have long been experiencing military brutality. But before the attempted coup, some people in central Burma downplayed, and even dismissed, reports of the military’s atrocities against Indigenous communities. Following the attempted coup, those in central urban areas found those atrocities happening in their own backyards for the first time in many years.

Still, at first many people from Burma’s ethnic Bamar majority called for a return to the pre-coup status quo. While this would mean an end to violence in the streets of central Burma, returning to the status quo would mean not addressing the repression of – and violence against – the country’s diverse Indigenous populations.

But Indigenous activists, including Inter Pares’ counterparts, refused to let inequalities of past struggles repeat themselves. They are claiming space at the heart of the resistance. They are adding their voices to public discourse and continue to put forward their vision for a new future – one with Indigenous rights and equality at its core. As the resistance continues, their call has spread throughout the country, becoming a core national demand.

What started as a call to preserve the status quo has evolved into political action to build a country where everyone is included.

How can you support activists' work in Burma?

Send a letter to your Member of Parliament

With just a few clicks, you can send a letter to your MP asking the Canadian government to take urgent action on the humanitarian crisis and end mass atrocities in Burma, and asking your MP to join a parliamentary friendship group.

Our counterparts in Burma create spaces where people from different Indigenous groups can come together to share experiences and build a common vision for a future in which their rights and cultures are respected. United, their message to the military is loud and clear: you messed with the wrong generation.

You can help amplify the voices of Indigenous people in Burma by making a gift to Inter Pares today. Donate now.